Bi-specific antibodies, like a bridge between cancer and immune system

Monoclonal antibodies are specialized bullets that target only specific molecules. Some antibodies recognize proteins expressed by tumor cells, while others bind receptors on the surface of immune cells. What if they can do both? A class of antibody called BiTE (bi-specific T cell engager antibodies) is able to simultaneously bind a T cell and a cancer cell, forming a bridge between the two and thus helping the former destroy the latter.

Targeted therapies has been the forefront in cancer treatment. Immune components offer a great advantage over conventional anti-cancer drugs, because they are much more selective. Monoclonal antibodies are Y-shaped proteins, whose two arms recognize and target even the smallest part of a molecule with excellent precision. But that was only the beginning.

Traditional antibodies can recognize only one specific molecule, or antigen. An “upgraded” version is able to simultaneously target two different types of antigen. The new antibodies are called “bi-specific” and consist of two fragments from two separate antibodies fused within the same protein. There are clear advantages: targeting more than one molecule can be useful to avoid resistance to treatment. Moreover, carcinogenesis is a complex process involving many different pathways and factors: acting on multiple fronts at the same time can be beneficial to stopping disease progression.

The first bi-specific antibodies were manufactured simply by fusing two whole halves of two different antibodies together. Then, research has moved to a smaller and smaller design.

Take a bite out of cancer

The most recent bi-specific antibodies are called BiTEs (bi-specific T cell engager antibodies). Compared with traditional monoclonal antibodies, and even with the first bi-specific, they are smaller. They no longer even look like a "Y": they have nothing but two arms. One recognizes a defined tumor antigen; the other binds the T-cell receptor. The BiTE is like a bridge, with the extremities interacting with two distinct cell types. 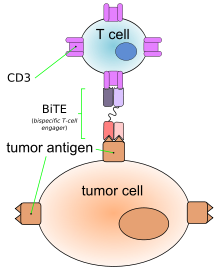 T cells are the most effective against cancer, but their activation process is long and complex, as it involves many co-factors. BiTEs not only help T cells find cancer cells, but also allow them to become immediately activated, skipping many intermediate steps.

The first BiTE antibody called blinatumomab was approved for the treatment of acute lymphoblastic leukaemia. On arm of blinatumomab binds to T cell receptor, the other interacts with CD19, an antigen expressed on malignant B cells. As a result, the T cell becomes able to destroy the cancer cell.

Despite its approval, blinatumomab is still under investigation to identify the optimal treatment duration and schedule. In addition, its persistence in the body is very poor; due to its small dimensions, it is rapidly eliminated and thus continuous intravenous infusion is required. However, BiTEs, together with CAR-T and other forms of targeted therapy, represent a new promising frontier in the fight against cancer.