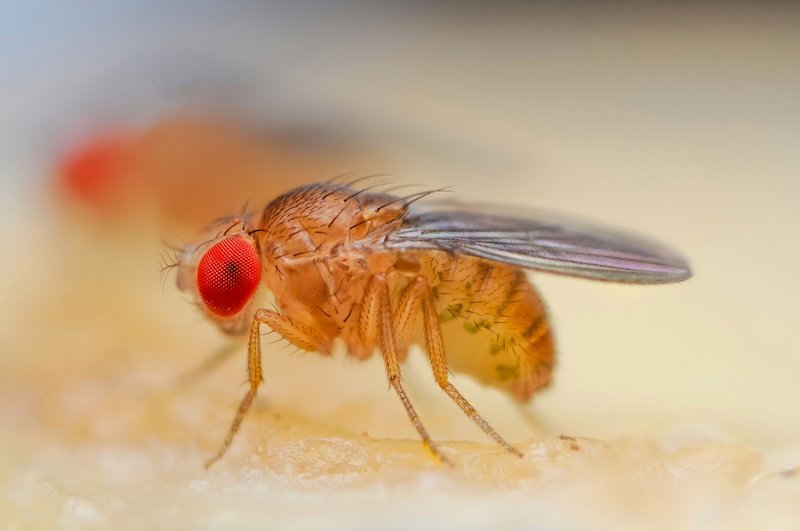 From model organisms for oncology research to “avatars” for personalized medicine: fruit flies can develop tumors very similar to humans and contribute to the search for new therapies to increase patient survival.

The experience of a fruit fly with cancer seems light years away from that of a human cancer patient. But this small arthropod and Homo sapiens resemble each other more than appearances suggest. Fruit flies can get drunk, become obese, develop diabetes and neurological diseases. In the two species, tumors also behave similarly and use the same cell signaling pathways. Scientists are studying these similarities to accelerate the development of new personalized therapies and increase patient survival.

The fruit fly, also known by the scientific name of Drosophila melanogaster, is the model organism that appears most frequently on genetics text books in high schools or universities. Their role in cancer research, however, is less known.

At first glance, the fruit fly bears very little resemblance to humans. Yet, from a genetic point of view, the two species are quite similar, with 60% of DNA "in common". 75% of the genes responsible for human diseases have a correspondent in Drosophila. With respect to cancer, most of the signaling pathways that control cell proliferation and migration and DNA damage repair in mammals are similar to those of flies. In other words, they are "conserved" between groups of species, even very distant from each other.

For these reasons, therefore, the fruit fly is a good model for studying tumors, from the formation to the proliferation and migration of cancer cells. Compared to other models, it is easier to manipulate, less expensive and subject to fewer ethical restrictions. Furthermore, the short life cycle allows to study the effects of drugs for many generations and to have large numbers of individuals available.

WHAT KILLS A CANCER PATIENT?

In studies on fruit flies, for example, researchers can follow the animal with the tumor until natural death - while rodents and other mammals are euthanized at the first signs of suffering. In two studies published in Developmental Cells, researchers used flies to answer a question that may seem trivial, but is not: what kills a cancer patient?

Many cancers, such as those of the liver or pancreas, impair the functions of vital organs. If the primary tumor is not located in a vital organ, by the same logic, metastases could kill the patient. But in the case of non-metastatic cancers and in less critical organs, such as the ovaries or skin, things get more complicated. And it is difficult to give an explanation that depends exclusively on the cancer cells and not on "something else".

By studying Drosophila tumors, which are similar to human ones, the researchers found that cancer cells release a series of chemical compounds into the bloodstream that have a remote action. One in particular, interleukin-6 (IL-6) compromises the blood-brain barrier, which normally keeps the brain separate from the bloodstream, with disastrous consequences. Another blocks the effects of insulin, which allows the body to absorb glucose into the blood for energy - could explain one of the most common systemic effects in cancer, cachexia (organic wasting, weight loss, physical weakness). Other substances secreted by the tumor would be associated with edema, clots and immune dysfunctions.

The hypothesis of the researchers is that blocking the action of these chemical compounds would allow to increase patient survival. A rodent study showed that 75% of mice treated with an IL-6 inhibitor were still alive 21 days after cancer induction, compared with 25% of untreated mice. Compared to traditional therapies, new treatments would represent a paradigm shift: they would target not cancer cells, but the "dialogue" between the tumor and healthy tissues, which can also take place far from the original site of the tumor. Furthermore, since cancer cells are not a direct target, the tumor should not develop resistance to the effects of the drugs.

Another scenario concerns personalized or precision medicine. Each patient's tumor is different, meaning it has specific and unique mutations in its DNA. The same drug, therefore, could have different effects, even if patients have the same "type" of cancer. But what does Drosophila have to do with it?

One of the possible scenarios is to transform Drosophiles into hundreds of thousands of small "avatars", which will have the same mutations in the genes corresponding to those mutated in the patient's tumor. It could be argued that methods already exist for culturing cancer cells from patients in the laboratory, generating complex three-dimensional cell models called "tumoroids". However, this method does not reproduce the complexity of an entire animal organism, which also includes blood vessels, an immune system and an extracellular matrix. But then the "avatars" could be mammals more similar to humans, such as rodents. As we have seen, however, Drosophila and its genome are easier to manipulate and allow to test many combinations of drugs simultaneously and in a shorter time, since they have a very short life cycle.

The "fly-to-bedside" approach ("from flies to the patient's bed") is still in the experimental phase but in recent years at least two scientific articles have been published, the first in 2019 in Science Advances and the second in 2021 in iScience. The cocktail of personalized drugs selected with the cancer-avatars screening stabilized the conditions of two patients with colorectal cancer and adenoid-cystic carcinoma for one year, slowing the progression of the tumor.

Someone has decided to invest in this visionary project. The London start-up Vivan Therapeutics aims to conduct a real clinical trial based on a "bank" of flies for each individual patient. Hundreds of thousands of Drosophiles with the same mutations as a human patient would be "enrolled" in the clinical trial to perform thousands of parallel drug screenings against that particular tumor.  Howevere, the researchers at Vivan Therapeutics hope that in the future this work could be carried out by artificial intelligence, using machine learning algorithms to identify combinations of drugs that are effective against particular sets of mutations.