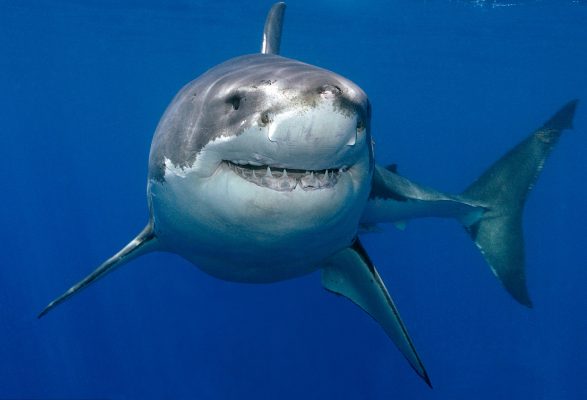 White shark: their only name inspires fear. Not only are they the most dangerous sharks in the world, but they also got a few tricks up their sleeve: their wounds heal very fast; they are long-lived and rarely get cancer. Now, their genome has been fully decoded for the first time, revealing the molecular secrets of white shark’s extraordinary adaptation. The findings are reported in the journal Pnas.

That was a big challenge. First, because the white shark’s genome is very large, one-and-a-half times the size of the human genome (more than four billion base pairs). Second, it is quite “messy”: about a half is made of repeated DNA sequences and “jumping genes”.

A team of researchers from Nova Southeastern University, in Florida, has explored the complexity of the white shark’s genome in order to understand its secrets. They found that some elements were particularly recurrent in many genes, which means that they had been positively selected by millions of years of evolution. Most of these conserved sequences are involved in genome stability and wound healing.

Genome instability usually leads to cancer or age-related diseases in humans and other species. Errors in DNA replication or exposition to environmental risk factors can modify the genetic sequence and introduce mutations. However, white sharks should not really worry about it. Their genome is full of molecular adaptations that help to maintain genomic stability, for example by repairing damaged DNA.

On the other hand, we mentioned before that the white shark’s genome does not simply “stand still”, as it is rich of mobile genomic elements, called transposons, that literally jump from one site to another. Apparently, their very presence contradicts the definition of genomic stability; but scientists suggest that they could be just the selective agents that determined the evolution of such efficient DNA repair mechanisms.

Avoiding cancer is not enough to live long, though; and white sharks can reach up to 70 years of age. In fact, they can also count on specific genomic adaptations associated with wound healing, like those in blood clotting genes. As a result, they heal rapidly even from large wounds.

The value of comparative genomics

Now that we know something more about the white sharks, what do we do about it? First, these findings can help conservation scientists to safeguard this species, often threatened by excessive fishing.  However, comparative genomics has also a translational value. Each species has their own resources and adaptation tricks: the more we understand about evolutionary strategies, the better we can translate them into new therapies to accelerate wound healing or fight cancer.