A personalized vaccine against ovarian cancer 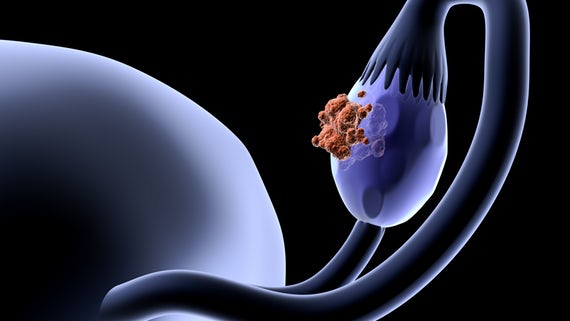 Every cancer is different, so why should therapy be one? Personalized medicine is the new frontier in immunotherapy and aims at targeting tumour specific mutations, which differ between patients. Researchers from the University of Pennsylvania developed a personalized vaccine against ovarian cancer, which is safe and induces a broad antitumor immunity. Further clinical investigations are required to assess the efficacy of such vaccine: in the meantime, aren’t you curious to find out which strategy they used?

The current therapeutic options for advanced epithelial ovarian cancer are surgery and chemotherapy. Unfortunately, despite the initial good response, relapses and drug resistance are very frequent. Some studies suggest that ovarian cancer patients could benefit from immunotherapy, but it is not that simple. Only a small fraction (10-15%) responds to therapy with immune checkpoint inhibitors. This is probably due to the particular conformation of tumour microenvironment, where soluble factors establish a physical barrier to the infiltration of tumour specific T-lymphocytes and immunosuppressor cells or ligands attenuate their functions.

The lights and shadows of cancer vaccines

Despite the modest results, immunotherapy is still the best candidate to fight ovarian cancer. All we need is to refine our weapons and possibly combine them into a more effective treatment. Immune checkpoint inhibitors awaken the immune system, removing the brakes that prevent T-lymphocytes from attacking the tumour, but sometimes they are not enough; cancer vaccines are potential partners for combination immunotherapy, as they expand the pool of available tumour specific T-lymphocytes. Research on cancer vaccines has run aground for a period, because most were designed against “self” antigens, which, despite their association with the tumour (e.g. abnormal expression, extra copies), are protected by self-tolerance (the ability of the immune system to recognize self-produced antigens as a non-threat).

Why should we settle on a single “self” antigen when the tumour itself is an inexhaustible source of mutations? Because of their intrinsic genomic instability, cancer cells produce many mutated proteins (neo-antigens) that differ between patients and that the organism has never seen before, overcoming the tolerance-related issues and reducing the side effects on healthy tissues, which do not express the mutation. The problem is the identification of the neo-antigens that should be included in the vaccine.

A potential alternative is the use of patients’ whole tumour extracts, which contain numerous tumour relevant antigens, including neo-antigens. Coming back to our personalized vaccine against ovarian cancer, researchers prepared a tumour lysate by dissociating the tumour into single cells, which were then killed by oxidation and chemical substances and lysed by repeated freeze-thaw cycles. Then, they isolated the patient’s dendritic cells (DC), which are responsible for antigen presentation to T-lymphocytes and initiation of the immune response, and pulsed them with the tumour lysate. Once re-injected back in the patient, the activated DC are able to present a number of relevant tumour antigens to T-cells, actually broadening the repertoire of tumour specific lymphocytes. This is fantastic, but how can we be sure that such T-cells able to target the most recondite tumour antigens will actually reach the tumour?

Scientists combined the vaccine with an antibody blocking the vascular endothelial growth factor A (VEGF-A), a soluble factor involved in the establishment of an endothelial barrier preventing T-cells from infiltrating the tumour. In addition, immune checkpoint inhibitors can be added to this combination, reinforcing T-cells response. An explosive mix, which proved to be safe, feasible and effective and, most importantly, associated with improved survival.